– Meme of the Month

“Since the dawn of social media, we’ve grown accustomed to the feed. We were fine with our FOMO-fueled vertical scrolling—until stories came along and changed the game. Even the most resource-challenged CMOs are realizing the need to develop their story strategy, a decision supported by three key drivers: engagement, visibility and insights.

Engagement
If there is one metric that drives all digital marketing, it’s engagement. No other indicator contributes as much to online success. Higher engagement rates directly impact how the algorithms rank brand accounts on platforms like Instagram and Facebook. When followers engage more often, they deepen their relationship to the brand, which has been quantitatively proven to drive growth.
Since early 2016, use of stories has increased 987 percent across Instagram, WhatsApp, Snapchat, Facebook and Messenger, according to a report from Block Party. Stories have also seen a highly engaged growth rate 15 times higher than feeds. But what sparked this change in the first place?
As with most innovations in recent memory, we have smartphones to thank. Back in the early days of social, feeds were designed for desktops, but stories were born in the camera culture. Our phones became content collectors that empowered us to craft full-screen digital experiences through combining photos, videos, audio, gifs and text.
Snapchat launched stories in 2016, and Instagram popularized the format soon after. With over one billion social accounts now creating stories daily, they are becoming the bridge between social content and leaving the feed to fend for itself.
Although 81 percent of Snapchat users engage with stories compared to 60 percent on Instagram, Instagram has the advantage going forward. One-click distribution across the Facebook ecosystem and a substantially larger user base make it an unfair fight. While Snapchat leads in innovation, Facebook and Instagram have the reach and cash to scale at the speed of digital.
Visibility
A brand with better rankings from the algorithms is seen by more people. Higher visibility leads to increased awareness, follower growth and organic brand reach. Using as much platform-specific functionality available (GIFS, stickers, polls, questions, songs) also ranks an account higher. In other words, don’t be afraid of a little digital bling.
Leaders are emerging within certain sectors like news, beauty and sports. Their stories include video, photos, questions, polls and GIFS that deepen interest and spark sharing.
The New York Times often uses Instagram Stories to add depth to their reporting and give readers a way to connect beyond the headlines. Their pieces range from emotional vignettes about immigrant families being reunited to empowering profiles of those impacted by the #MeToo movement.
Innovative beauty brands like Glossier haven’t missed a beat when it comes to stories. The highlight icons on their Instagram profiles strategically lead to stories like “Mixtapes,” where you can hear the songs playing in the Glossier showroom. Their stories also include downloadable wallpaper designs, product content like Zit Stick and Haloscope and a History option that tells the backstory of their flagship location. Even in stories, Glossier is leveraging their omnichannel advantage.
Sports teams like the Philadelphia Eagles, Seattle Sounders and San Francisco Giants got into the game early and see stories as a way to huddle up with fans. Some teams even cast their stories to stadium jumbotrons, driving massive visibility.
Insights
Considering that stories can (and should) be interactive, they are also a powerful way for brands to learn from their followers. Identifying top stories with high completion rates, including polls, asking questions (via stickers) and mining responses are simple ways to gain insights from these valuable connections.
The direct-to-consumer shoe brand Allbirds uses Instagram Stories to answer customer questions, get feedback on new product concepts and introduce new collaborations like its new Shake Shack shoe (free Hokey Pokey shake included).
These are the early days in the growth of stories. Innovations within the format are constant and increasingly add richness to the experience. Most recently, Instagram added the ability to shop from stories, creating a new way for brands to drive revenue. Given the rise of dark social, platforms like Giphy and Emogi are becoming effective distribution channels for branded content that builds awareness across millions of consumer-created stories.
While the feed served our need in the early days of social, stories are evolving the narrative. Strategic brands should embrace the opportunity and use it to tell their most engaging tales.”
“Since The Dawn Of Social Media, We’ve Grown Accustomed To The Feed” March 11th, 2019Anthony Cospito
Sticky Post By Anthony Cospito Posted in Engage, MI&C In The News, WTKAW Permalink

FOMO is a terrible thing. Here at Moving Image & Content we’ve got more than a healthy obsession with all things pop culture. Each month we share our favorites in a video series called What The Kids Are Watching (WTKAW).

FOMO is a terrible thing. Here at Moving Image & Content we’ve got more than a healthy obsession with all things pop culture. Each month we share our favorites in a video series called What The Kids Are Watching (WTKAW).

Here at Moving Image & Content we’ve got more than a healthy obsession with all things pop culture. Each month we share our favorites in a video series called What The Kids Are Watching (WTKAW).

END_OF_DOCUMENT_TOKEN_TO_BE_REPLACED

It was déjà vu all over again. Hundreds of marketers and developers recently gathered at an innovation conference to hear all about the future of voice. Reminiscent of digital’s early days, the enthusiasm was palpable. This time around though – there’s a base of 2.73 billion smartphone users to build on.

Inspired by the plush pioneer Teddy Ruxpin and classics like “The Clapper” – voice has come a long way. We’re closer than ever to having a JARVIS in our pocket and the implications for brands are profound.

Strategy Analytics is forecasting that over half of all smartphones will have access to virtual assistants by 2019, a figure expected to climb to 90% in the next four years. Looking beyond smartphones, IHS Markit says more than 5 billion consumer devices will connect to digital assistants in 2018, growing to nearly 8 billion by 2021.

Smart speakers are leading the way as the channel of choice for 1 in 4 U.S. adults with 175 million users projected by 2022

Astonishing growth rates aside – the learning curve for voice is practically a straight line.

Unlike other new technologies, voice requires little training. There is no software to install, windows to open or user interfaces to master. All anyone needs is their voice, and knowing how to get the attention of their digital assistant. Although that second part may be a bit more challenging than anticipated for some.

85-year-old Maria Actis famously had some trouble learning how to talk to her Google Home Mini. Her grandson uploaded a video of her to YouTube that quickly went viral. It showed her comically calling out “Hey Goo Goo” instead of “Hey Google.” She eventually got it right, and became a believer.

Google Assistant became a believer in Maria too, you can now say “Hey Goo Goo” instead of “Hey Google” for any request

Although Apple’s Siri leads the market with a 44% share compared to Google Assistant’s 30% and Amazon Alexa’s 17% – the one to watch is Google. 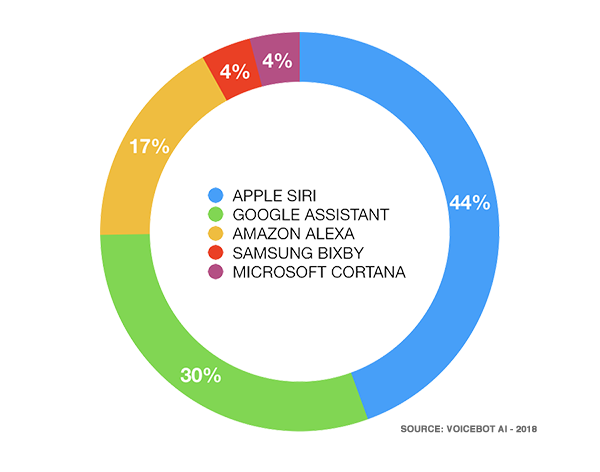 According to research firm Canalys, Google Home smart speaker shipments exceeded Amazon Echo shipments for the first time in Q1 2018. Google’s voice recognition has also consistently been ranked higher, even among a range of accents. In June 2018, Google Assistant raised the bar again, adding Spanish to its skill set.

As in the early days of mobile, voice has a myriad of opportunities but the platform can be challenging for brands to understand where to start. Three trends include rise of the senior market, voice shopping and voice brand strategy.

THE SENIOR SET
Voice is the ideal platform for seniors who currently control 70% of discretionary spending in the U.S. It’s a frictionless way for them to get information, entertainment and stay connected to friends and family. With 25% of seniors qualifying as “isolated” according to Heidi Culbertson founder CEO of Marvee, voice provides invaluable potential for mental health and wellness benefits.

There are currently hundreds of voice assistant pilot programs in place at senior homes and assisted living facilities across the U.S.

Devices like Amazon Echo and Google Home are being tested to help the seniors through their day. Consumers over the age of 85 are the fastest growing segment of Americans and more than ever before they are healthy, active and love to socialize. Collectively they exceed 50 million and represent 50% of CPG spend, opening up white space for brands like P&G, Unilever and Kraft Heinz.

Although it’s a small portion of the $450 billion online commerce space, voice based commerce is on track to grow 20x its current level of $1.8 billion by 2022 according to Voicebot.ai. To date, 26% of smart speaker owners have made purchases using their device.

Leading the growth are 18-29 year old males, 23% of which have re-ordered from previous purchases, 32% ordered something new and 20% have done both. Despite the growth, brands like Nike and Lego see revenue as a secondary goal.

While commerce holds potential, brands shouldn’t necessarily be focused on using voice to drive revenue right now. Instead, they should target lower in the funnel to deepen engagement and build brand affinity with existing customers.

This approach deepens relationships and builds mindshare with existing customers. With the average cost of new customer acquisition 6-7x higher than retaining an existing customer – focusing on delivering surprise and delight moments can be a smart way to introduce voice and create a memorable moment. 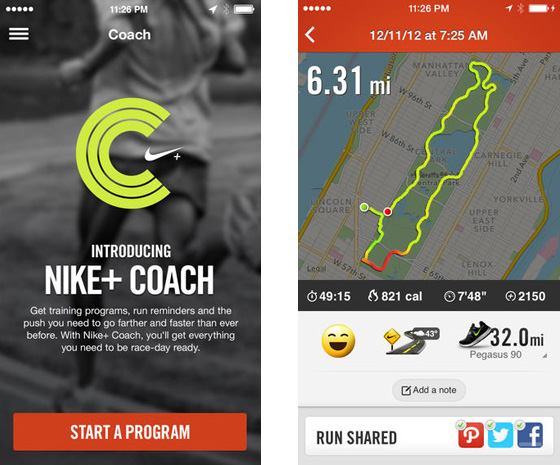 Lego builds on this approach. With 62% of kids using smart speakers, voice is a perfect fit. Similar to Nike, Lego doesn’t use voice to sell directly. Instead they launched an interactive skill on Amazon Alexa called Lego Duplo Stories, an interactive experience that combines storytelling with their big brick toys. 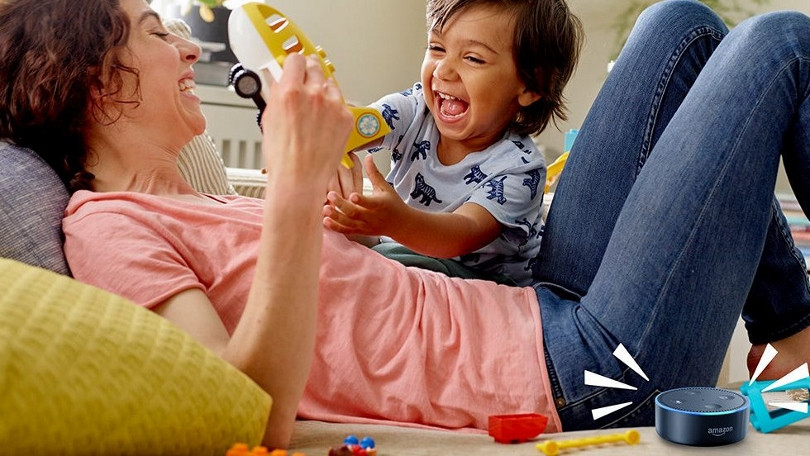 The skill can be used even if users don’t have all the Lego pieces. The value to Lego is in the data consumers generate in their conversations which reveal their true needs, ideas, questions, and challenges. These insights can then be leveraged to improve the experience.

As bright as the future of voice is, there are blocks to mass adoption. First and foremost is discoverability – a challenge also faced in the early days of the app store. Navigating the Google Assistant app store even feels similar to the Apple app store back in 2007. Too many choices, not enough curating, or user reviews.

Another challenge is educating consumers about the capabilities of voice assistants and smart speakers, although Google is quickly taking the lead here. Functionality such as the ability to remember things, engage in continuous conversation (without having to keep saying ‘hey Google”) and recognize different users through voice matching will likely leave Alexa and Siri stumbling to find their words.

How should brands bring voice into the mix? Think iteration over transformation. Take small steps that add incremental value for existing customers rather than making short-term revenue and new markets the driver.

The meteoric rise of voice shows consumers are comfortable having conversations with non-humans with names like Alexa, Siri and Google. Smart brands need to set their goals, plan their strategy and get ready to speak up.

“We’re closer than ever to having a JARVIS in our pocket and the implications for brands are profound.” December 6th, 2018Anthony Cospito